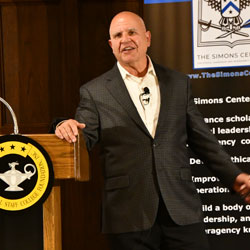 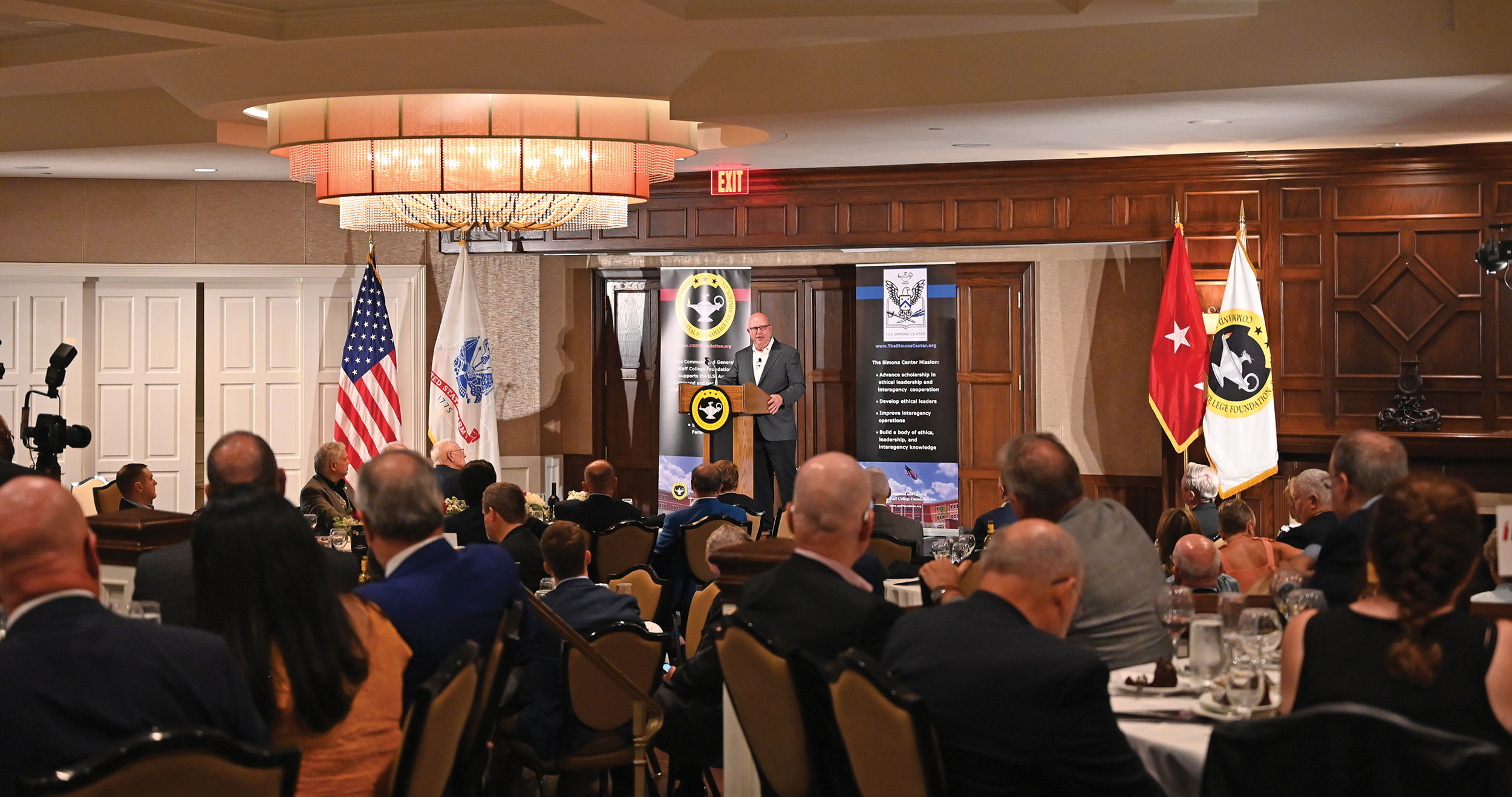 The CGSC Foundation hosted a Simons Center Distinguished Lecture Series event on Sept. 7, 2021, at the Carriage Club in Kansas City, Mo. The special guest for the evening was retired Lieutenant General H.R. McMaster who served as the 26th assistant to the President for National Security Affairs. 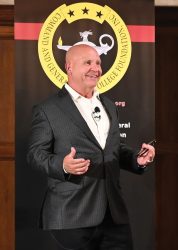 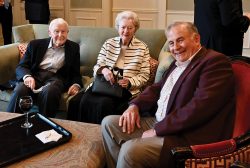 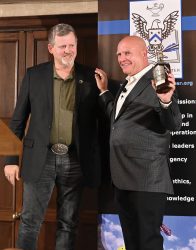 Retired Army Special Forces Maj. Mark Nutsch, leader of the renowned A-Team that went into Afghanistan in the early days after 9/11 and rode on horseback against the Taliban, presents retired Lt. Gen. H.R. McMaster with an autographed bottle of his own “Horse Soldier Bourbon.” Nutsch presented the gift on behalf of the CGSC Foundation to thank McMaster for accepting the Foundation’s invitation as the guest speaker for the Simons Center Distinguished Lecture Series event on Sept. 7, 2021, at the Carriage Club in Kansas City, Mo.

The evening began with a reception for sponsors and guests and transitioned to a dinner program. During the program CGSC Foundation President/CEO Roderick M. Cox welcomed the gathered audience, thanked the sponsors, and as dinner was served, he introduced McMaster to the audience.

McMaster began his remarks commenting on his eagerness to serve the commander-in-chief as the national security advisor, but spent the bulk of his time speaking to what he called the “catastrophe” in Afghanistan and how it has its roots in misunderstanding, self-delusion and strategic incompetence and narcissism. He also spoke about its effects on Afghan and U.S citizens from a political and security perspective and what we all can do to begin to recover from this catastrophe and try to improve our competence and regain our confidence in who we are as a people.

“Everything you hear from Washington, D.C. today is the opposite of reality,” said McMaster. “This is due, I think, to self-delusion based on what I would call strategic narcissism – the tendency to define the world only in relation to us and to assume that what we decide to do or decide not to do is decisive toward achieving a favorable outcome.”

Because of this delusional approach to the world McMaster said we have lost our strategic competence, because our strategies, like the strategy in Afghanistan, are based on what we prefer rather than what the situation demands. The end result is self-delusion which has led to self-defeat.

McMaster listed several instances of “what we have heard from Washington” and provided facts revealing just the opposite.

“We heard that we had accomplished nothing in Afghanistan, we had wasted trillions of dollars, but then we watched as the Afghan people, especially women, overnight lost the freedoms they secured over two decades with the support of the United States and our partners,” he said.

“We heard that Afghan forces should have fought harder, that they rolled over, that they lacked will, but tens of thousands of Afghans made the ultimate sacrifice and the psychological blows delivered through America’s capitulation agreement with the Taliban, forced release of 5,000 Taliban prisoners, withdrawn air support, and sudden retreat fell harder on the Afghan government and security forces than even the physical blows the Taliban could deliver.”

After his comments describing the catastrophe in Afghanistan, McMaster shifted to talking about what we could all do to restore our confidence. He said the traumas of today are not unprecedented, citing events in the 1970s – the U.S. effort to leave and then recover from Vietnam, our civil rights struggles, the Iranian hostage crisis, and the oil crisis, economic struggles, so on. Pessimism pervaded the 70s and the United States appeared weak and in contrast, the Soviet Union appeared strong. Similarly, after recent traumas with a pandemic, a recession, social divisions laid bare by George Floyd’s murder and the violent aftermath, vitriolic partisan political divisions…and now this self-inflicted defeat in Afghanistan, have all added to a narrative of American decline.

“I believe that restoring confidence in America’s democratic institutions and processes requires empathy,” said McMaster. “Lack of empathy for one another is rooted in ignorance…Ignorance of history, compounded by the abuse of history undermines our ability to work together to improve our nation and our society.”

“We can all do our part now to overcome our differences, reinforce the worn fabric of our society, and work together to strengthen our nation and the free world,” McMaster said. “To realize the vision of the motto that appears on the Great Seal of the republic –– E pluribus unum – Out of many, one. As the patriot and civil rights activist Rosa Parks observed, ‘We will fail only if we fail to try.’”

After his remarks, McMaster conducted a short Q&A session with attendees and stayed in the room to take photos, autograph copies of his book and engage with friends old and new. The next morning he spoke to military officer students at the U.S. Army Command and General Staff College at Fort Leavenworth – students in the Class of 2022 of the Command and General Staff Officer’s Course (CGSOC) and the School for Advanced Military Studies (SAMS).

Lt. Gen. H.R. McMaster, U.S. Army, Ret., served as a commissioned officer in the U.S. Army for 34 years after graduation from West Point in 1984. He earned a doctorate in military history from the University of North Carolina at Chapel Hill and is the author of Battlegrounds: The Fight to Defend the Free World.

During his military career McMaster served as deputy commanding general of the U.S. Army Training and Doctrine Command; commanding general of the Maneuver Center of Excellence and Fort Benning; and commander of the Third Armored Cavalry Regiment. He was a company commander in Operation Desert Storm in 1991, earning the Silver Star for his actions there. After Desert Storm he served as a history professor at West Point from 1994-1996. He graduated from the U.S. Army Command and General Staff College in 1999, after which he commanded 1st Squadron, 4th Cavalry Regiment from 1999-2002, then later, commanded the 3rd Armored Cavalry Regiment from 2004-2006, deploying to Iraq with the regiment.

For more photos visit these albums on the CGSC Foundation Flickr site: 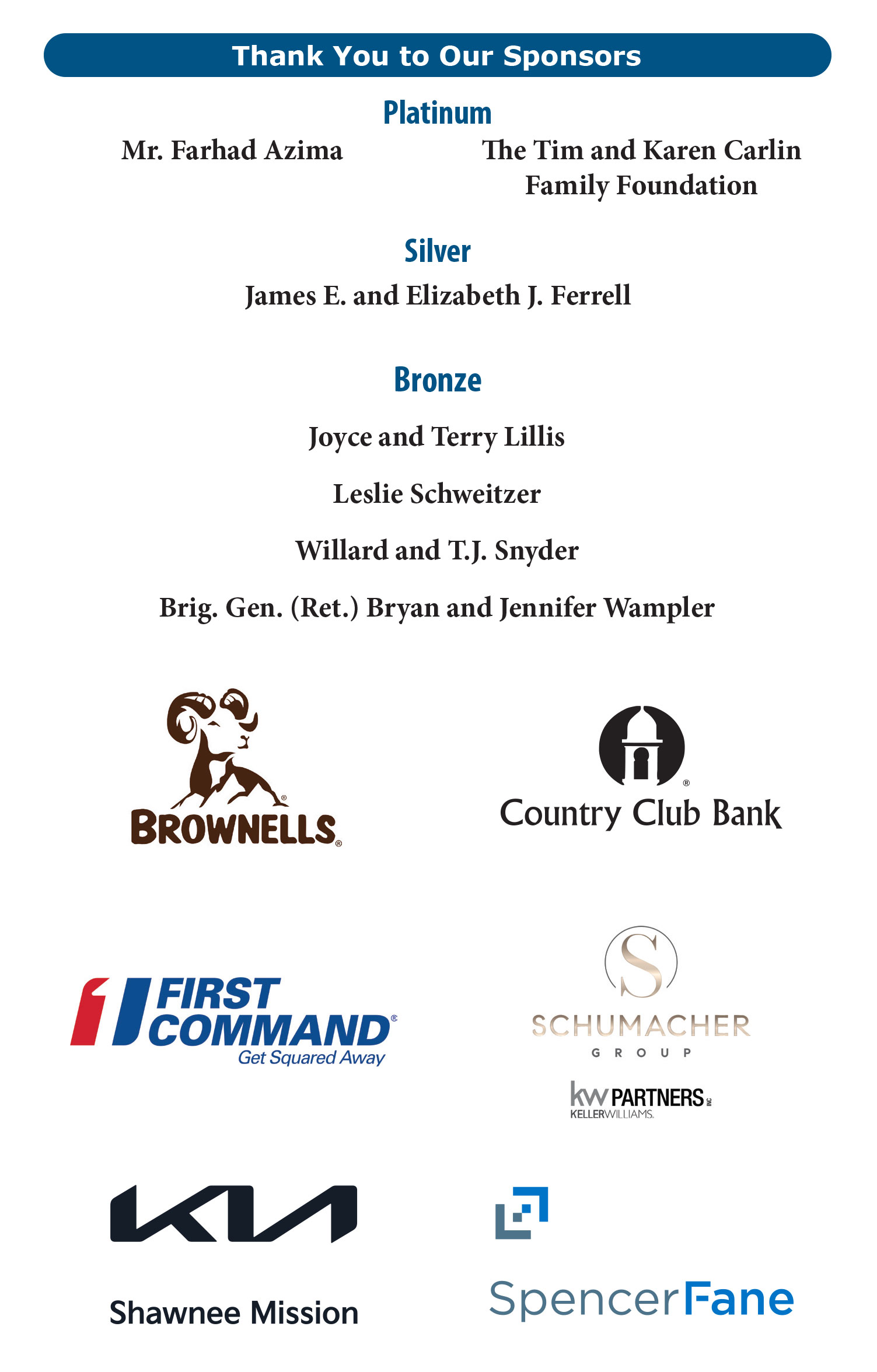