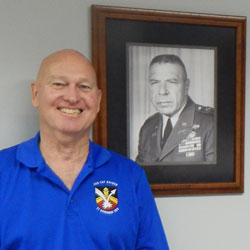 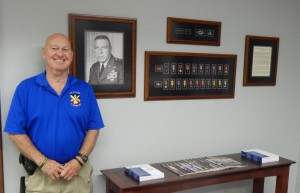 Former Special Forces Sergeant Terry Buckler visited the Simons Center June 9. During his visit he posed for this photo with the Bull Simons display in the center’s lobby. Buckler was a member of Simons’ Son Tay Raider team in November 1970.

Colonel Arthur “Bull” Simons led the Son Tay Raid, a rescue operation planned and executed to recover American prisoners of war being held in North Vietnam, on Nov. 21, 1970. Buckler was the youngest member of the Son Tay Raiders, and was interested in the Simons Center and its association with “The Bull.” During his visit, Mr. Buckler spoke about the preparatory training and conduct of the Son Tay Raid operation.

Program Director Rod Cox gave Buckler a tour of the facility and briefed him on the mission and history of the CGSC Foundation and the Simons Center, including the story behind Mr. Perot’s decision to name the Center in Colonel Simons’ honor.

For more information about Terry Buckler and the Son Tay Raid in November 1970, see Buckler’s presentation on the U.S. Army Heritage and Education Center YouTube channel.