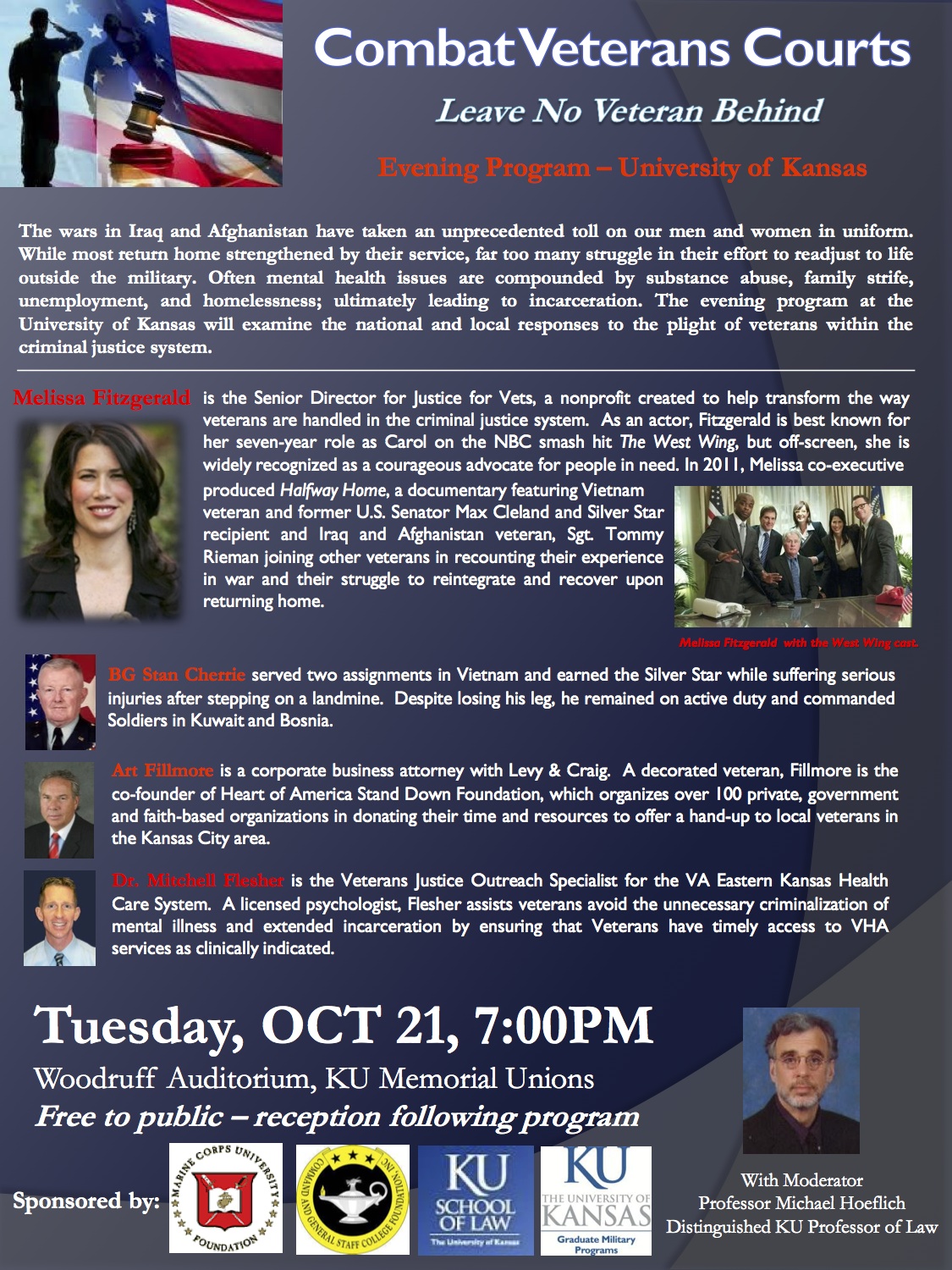 Both events are free and open to the public

Although American ground troop involvement in the wars in Afghanistan and Iraq is winding down, the nation will be dealing with the aftermath of both wars for years and decades to come. Questions and debate remain from how to successfully end military action to how to care for the new combat veterans that will need to reintegrate with communities at home.

The Command and General Staff Foundation is partnering with the University of Kansas Office of Graduate Military Programs, the Marine Corps University Foundation and KU School of Law to present two events next week that address these topics.

The first event “Combat Veterans Courts – Leave No Veteran Behind,” will be conducted Tuesday, Oct. 21, at 7 p.m. in Woodruff Auditorium in the Kansas Union, 1301 Jayhawk Blvd. This event will include Melissa Fitzgerald, senior director of Justice for Vets, a nonprofit created to help transform how veterans are handled in the criminal justice system. Fitzgerald is best known for her seven-year role as Carol on the NBC series “The West Wing.”

Off-screen Fitzgerald is widely recognized as an advocate for people in need, as she co-produced a 2011 documentary “Halfway Home,” which veterans recounted their experience in war and struggle to reintegrate and recover upon returning home. Fitzgerald advocates for veterans’ treatment courts that are aimed at helping veterans who suffer from mental health issues, substance abuse, family strife, unemployment and homelessness avoid incarceration.

“Veterans’ treatment courts across the nation are saving the lives, families and futures of veterans struggling with mental health disorders stemming from combat. Veterans’ treatment courts prove that we can hold justice-involved veterans accountable while also connecting them to the benefits and treatment they have earned and saving critical taxpayer dollars,” Fitzgerald said. “This event sends a strong message that the KU community is taking a leadership role when it comes to caring for our veterans. I am honored to attend an event with such a dynamic group of people and look forward to assisting with the effort to bring veterans’ treatment courts to Kansas.”

Fitzgerald will serve on a panel that examines the national and local responses to the plight of veterans within the criminal justice system. Panelists include retired Army Brig. Gen. Stan Cherrie, who served two assignments in Vietnam and despite losing his leg remained on active duty in Kuwait and Bosnia; Art Fillmore, a decorated veteran and Kansas City corporate business attorney with Levy & Craig who is co-founder of the Heart of America Stand Down Foundation that assists Kansas City area veterans; and, Dr. Mitchell Flesher, the veterans justice outreach specialist for the Veterans Affairs Eastern Kansas Health Care System.

Michael Hoeflich, a KU Distinguished Professor of Law, will moderate the event that is free to the public.

“With less than one half of 1 percent of the U.S. population in the Armed Forces, it would be easy to simply ‘not notice’ the challenges facing these young men and women as they return from the wars and try to reintegrate into society,” said Mike Denning, director of the KU Office of Graduate Military Programs. “Yet, that is not the path that Melissa Fitzgerald and Art Fillmore took. We hope the public will be inspired while learning about Fitzgerald’s and Fillmore’s efforts to provide legal support to those veterans in need.”

The following night, an event “War Termination: Vietnam, Iraq and Afghanistan” will feature Marine Lt. Gen. Paul Van Riper and compare and contrast the termination measures of the post-9/11 conflicts with Vietnam. The event is at 7 p.m., Wednesday, Oct. 22, at the Robert J. Dole Institute of Politics, 2350 Petefish Drive. It is free to the public.

Van Riper served in Vietnam as an adviser with the Vietnamese Marine Corps in late 1965 when he was wounded and evacuated. He returned to Afghanistan and has commanded at every level before becoming the first president of the Marine Corps University in 1989, and he has most recently served as chairman of the board of directors for the Marine Corps Heritage Foundation.

“The best military leaders soon learn  that the mind is their most important weapon. Among all the activities  that arm the mind, the most important is the study of history and the classical theorists,” Van Riper said. “Whenever leaders of the U.S. Armed Forces have lost sight of this fact, great difficulty has followed; no better examples exist than the Korean and Vietnam Wars and the 2003 invasion of Iraq. Force of  arms will not win the current war against a global Islamist insurgency without a strategy and supporting campaign plans. We will not have such a  strategy and associated plans until those responsible for our national  security gain a requisite knowledge of history and military theory.”