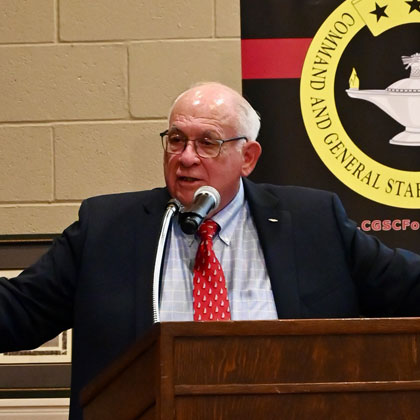 The 14th lecture in the Vietnam War Commemoration Lecture Series was conducted May 12, 2022 at June’s Northland in downtown Leavenworth, Kansas. Dr. James H. Willbanks, Professor Emeritus and former General of the Army George C. Marshall Chair of Military History at the U.S. Army Command and General Staff College and decorated Vietnam War veteran, was the returning presenter in the series. 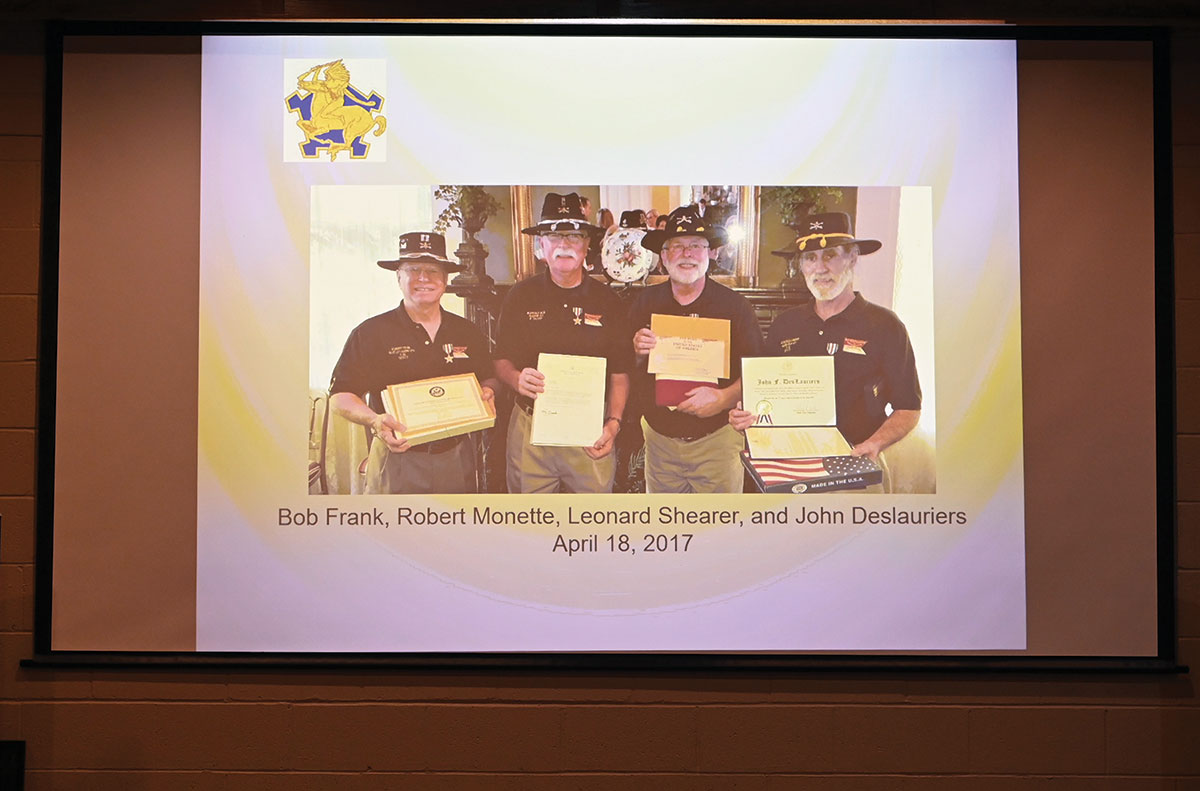 During his presentation, Dr. Willbanks recognized the Huey helicopter crew that saved a the crew of an Air Force C-130 that crash landed near An Loc on the day of the battle. Bob Frank, at left in the photo, was present for Willbanks’ lecture on May 12. 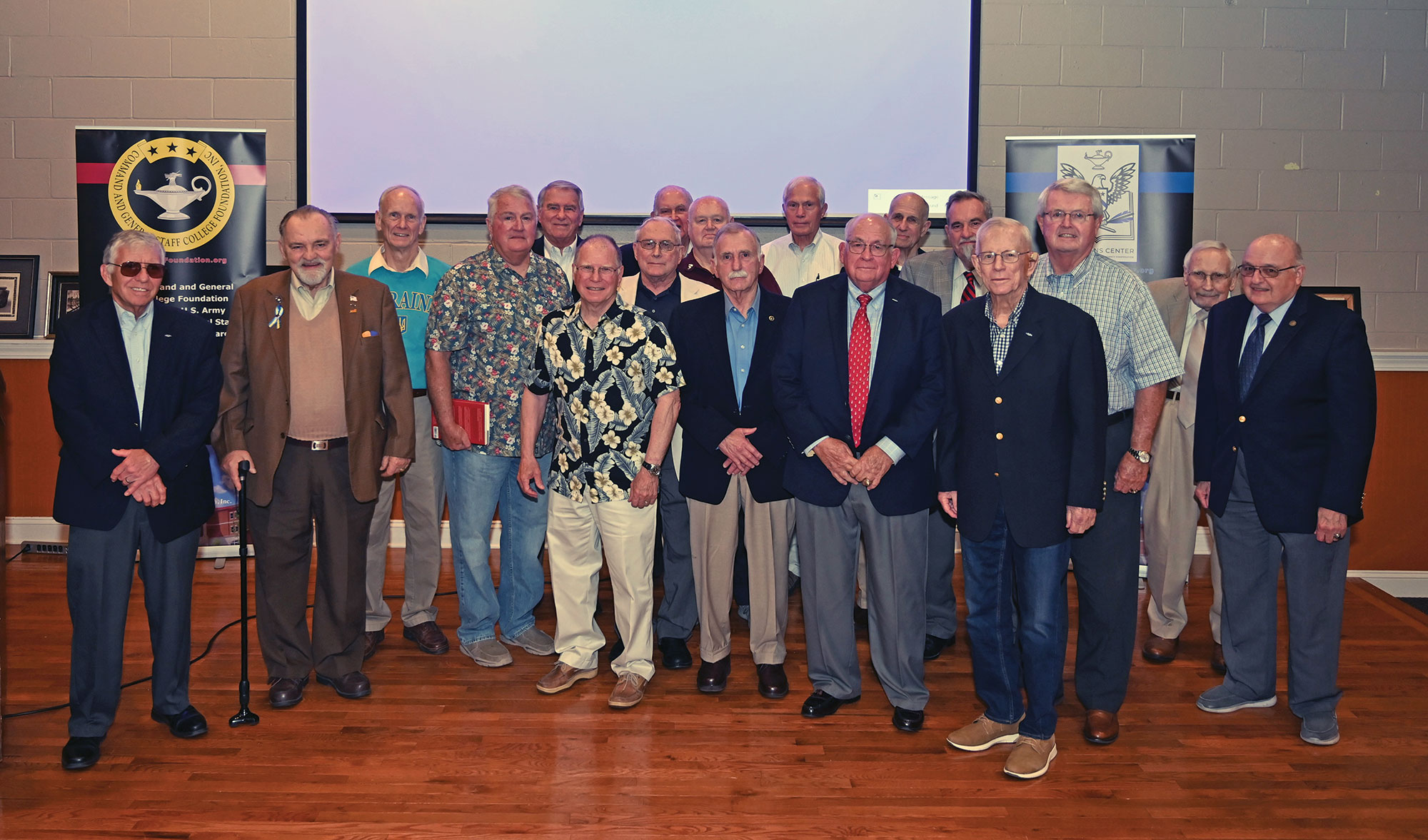 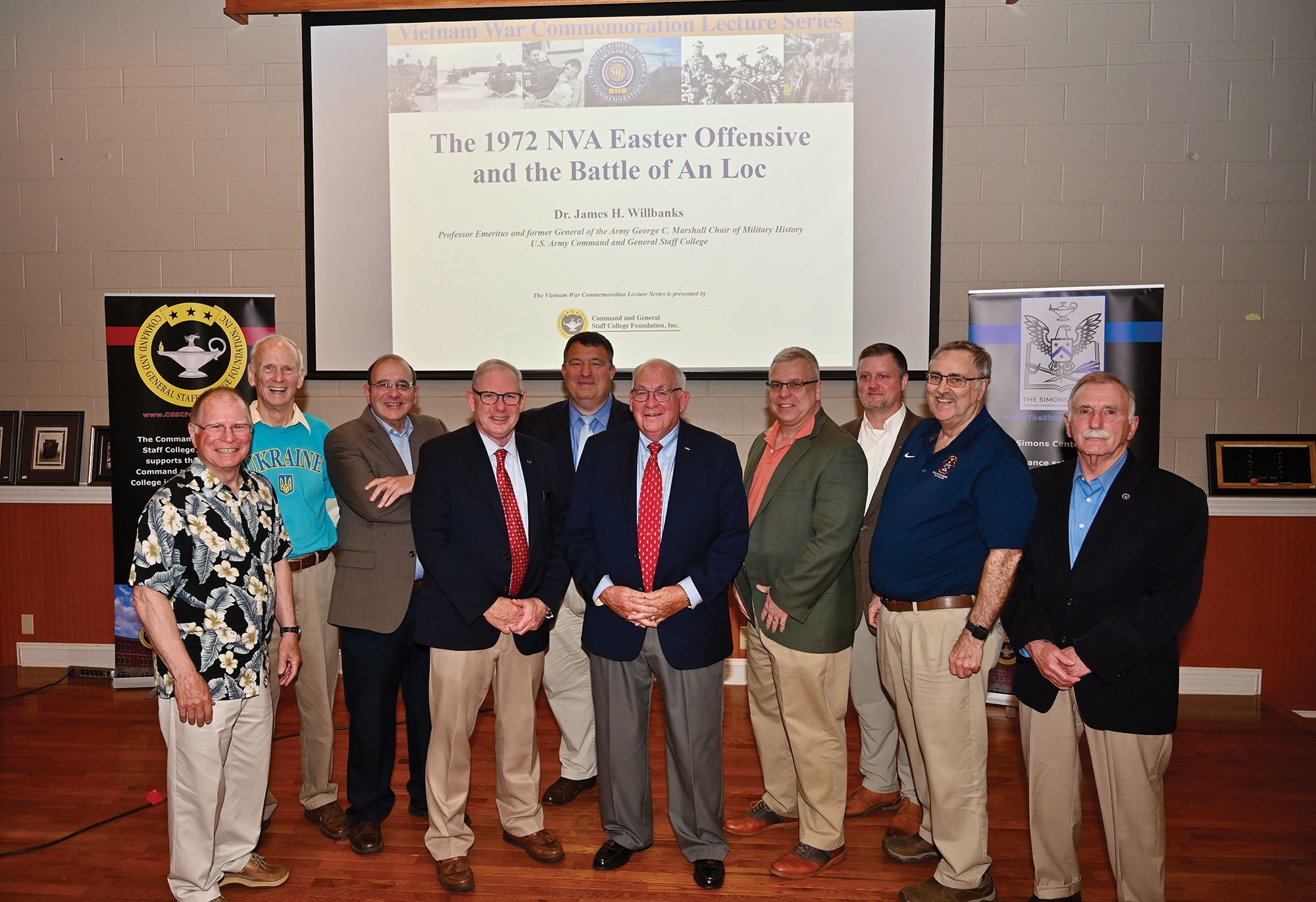 Dr. James H. Willbanks, CGSC Professor Emeritus, gathers with some of his old CGSC colleagues after his lecture for the CGSC Foundation’s Vietnam War Commemoration Lecture Series on May 12, 2022, at June’s Northland in downtown Leavenworth, Kansas.

Willbanks’ presentation was focused on the 1972 Eastern Offensive and the Battle of An Loc. He addressed the overall situation but focused on the fight in An Loc, a city just 65 miles from Saigon, where he was an advisor with a South Vietnamese infantry regiment during the battle. Willbanks described the setting and how on March 30, 1972, the North Vietnamese Army launched a massive invasion of South Vietnam that included a massive three-pronged attack by fourteen divisions and twenty-six separate regiments – a total of more than 130,000 regular troops. The Nguyen Hue Offensive (as it is known in Vietnam) was targeted against Quang Tri in the north, Kontum in the Central Highlands, and An Loc in Military Region III. He went into detail on the battle at An Loc and how the NVA were held back by the ARVN supported by their U.S. advisors and close air support including attack helicopters, Spectre gunships and B-52 bombers.

During his presentation Willbanks spoke about the effort to support the ARVN and how a C-130 Hercules aircraft that was dropping supplies to the ARVN was hit by Viet Cong fire and ended up crash landing in a nearby rice paddy. One of the men responsible for helping save the U.S. Air Force crewmen on the plane was present at Willbanks’ lecture. Robert Frank from Leavenworth, then Capt. Frank, was flying a Huey helicopter during the mission and he and his co-pilot, Chief Warrant Officer 2 Roger Monette, followed the C-130 aircraft to its crash landing site. As they landed nearby, Spc. Leonard Shearer, one of their gunners, jumped from the helicopter and began searching for survivors as the other gunner, Spc. Spc. John Deslauriers, returned fire on enemy troops trying to overtake them. At this point in his lecture Willbanks recognized Frank in the audience. Frank received a well-earned round of applause from all the attendees. Not initially recognized for their actions in saving the C-130 crew that day, Franks, Monette, Shearer and Deslauriers were all finally awarded Silver Stars for their actions 45 years later in a ceremony in 2017.

After his lecture and a short question and answer period, Foundation President/CEO Rod Cox presented Willbanks with some small gifts in appreciation for his willingness to travel all the way from his home in Texas back to Leavenworth to present the lecture. Willbanks then took a group photos with all the Vietnam veterans in attendance and another group photo with some of his former CGSC faculty colleagues who also attended.

Dr. James H. Willbanks retired from the faculty of the U.S. Army Command and General Staff College in 2018, after 26 years of service following more than 23 years of active-duty service as an infantry officer in various assignments, to include a tour as an advisor with a South Vietnamese infantry regiment during the 1972 North Vietnamese Easter Offensive. While a member of the CGSC faculty, Willbanks served as the director of the Department of Military History and as the General of the Army George C. Marshall Chair of Military History. Dr. Willbanks is an honor graduate of the U.S. Army Command and General Staff College and a graduate of the inaugural class of the School of Advanced Military Studies. He holds a bachelor’s in history from Texas A&M University, and a master’s and doctorate in history from the University of Kansas. He is the author or editor of 20 publications on the Vietnam War and other topics in military history. Dr. Willbanks also served as a consultant to Ken Burns in the preparation of his 10-part documentary on the Vietnam War, which aired on PBS in 2017. Willbanks’ military awards and decorations include the Silver Star, Legion of Merit, Bronze Star with “V” and Oak Leaf Cluster, two Purple Hearts, and Republic of Vietnam Cross of Gallantry with two Silver Stars.

American involvement in Vietnam lasted 20 years and spanned three decades – from November 1, 1955 to May 15, 1975. Nine million Americans, approximately 7.2 million living today, served during that period. The nation inaugurated the commemoration of the 50th anniversary of the war on May 28, 2012, and the commemoration period will continue through Nov. 11, 2025, to recognize those that served and to help the public learn about the war and the lessons it provides. The CGSC Foundation is an official commemorative partner of the program and the Vietnam War Commemoration Lecture Series is conducted in support of that effort.