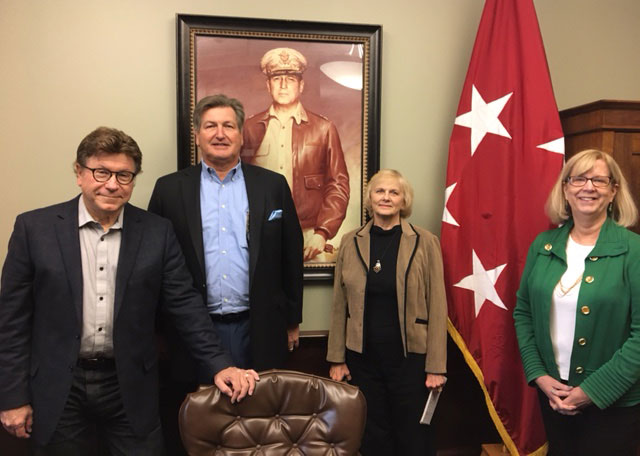 i.3.Identity leadership gather in the MacArthur Room of the Lewis and Clark Center during their tour Oct. 11, 2018.- From left, Dick Wilson, Gary Abram, Diane Stafford and Barb Mueth.

Foundation President/CEO Doug Tystad first led the group on a driving tour of Fort Leavenworth, taking them around to the key historic sites. They learned the story of how Col. Henry Leavenworth established the fort in 1827, after ignoring instructions to build it on the east side of the Missouri River, because it made more sense to be on the west side, high on the bluffs overlooking the river. As the tour bus followed those bluffs, the group had the opportunity to see the beautiful old brick homes, including the home of General MacArthur, which is the oldest continually inhabited home in Kansas. Next they passed by the old disciplinary barracks, which now houses a café and gift shop. They also drove past the National Simulations Center and also visited the monuments of General Grant and the Buffalo Soldiers.

After the driving tour of the post, Tystad brought the group to the Lewis and Clark Center, home of the U.S. Army Command and General Staff College. They group hit all the key spots in the building. – They had their pictures taken in the MacArthur room, perused the Fort Leavenworth Hall of Fame displays and went into the cavernous Eisenhower Auditorium, the largest auditorium in Kansas. As they walked through the building, Tystad explained the history of the beautiful stained glass windows, as well as the numerous displays of art and other objects presented to the College by international students, graduating classes and other visitors. The group also had the opportunity to interact with a group of CGSC students in a classroom and learn about the curriculum and how the classes are organized.

The group’s final stop was the International Hall of Fame. As Tystad discussed the history and importance of the international program at CGSC, he described how each international officer has civilian sponsors that cement long lasting friendships between the officers and individuals in the greater Kansas City community. He also discussed how the close working relationships and friendships built between U.S. and international students during the class year have historically helped facilitate military and diplomatic efforts around the world.

i.3.Identity’s visit was one of several visits by businesses and other organizations around the Kansas City region. Contact Joan Cabell, the CGSC Foundation director of development, to schedule your own group’s “Walk and Talk” tour of CGSC and Fort Leavenworth and learn about the education of leaders for the nation. – joan@cgscf.org.