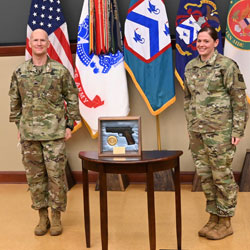 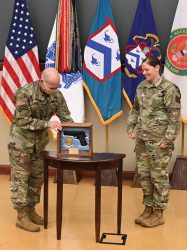 CGSS Director Col. Scott Green hosted the awards ceremony for the award recipients of the CGSOC Class of 2020 in Marshall Auditorium of the Lewis and Clark Center on June 11, 2020. The Marshall Award, the first award presented in the ceremony, went to Maj. Sarah M. Gerstein. As the first presenter, Green demonstrates how the COVID-19 compliant ceremony was to be conducted. Awards were to be placed on the table and after photos, the awards were picked up by the recipients.

Prior to the CGSOC Class of 2020 virtual graduation ceremony on June 12, CGSS Director Col. Scott Green conducted an in-person awards ceremony on June 11 in the Marshall Auditorium of the Lewis and Clark Center to present the individual awards to the winners. No other students or outside guests were allowed in order to comply with the COVID-19 restrictions. 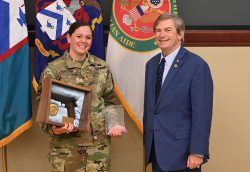 CGSC Foundation Chairman Mike Hockley with Maj. Maj. Sarah M. Gerstein, winner of the CGSOC Class of 2020 Marshall Award for the top graduate in the class. 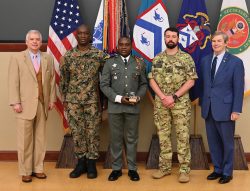 General George C. Marshall Award for the top U.S. graduate. – Maj. Sarah M. Gerstein, Military Intelligence
Sponsored by the CGSC Foundation through a gift from the Veterans of Foreign Wars

Major General Hans Schlup Award (Award is given to the student who best fostered international relations) –  Capt. Abdel-Aziz Ali Orou, Beni
Sponsored by the CGSC Foundation through a gift from the CGSOC Class of 1978

Civilian and Military Instructors of the Year are nominated from the various departments and schools within CGSC based on their excellence in the four domains of teaching, service, scholarship and faculty development. The candidates are observed teaching and also interviewed by a five-member selection board. Once the winners are selected at the College level, they represent CGSC as nominees in the U.S. Army Training and Doctrine Command’s Educators of the Year selection process. Winners receive the coveted premium front row parking spots outside the Lewis and Clark Center entrance.

During the ceremony CGSOC student Maj. Christopher J. Mattos was also recognized by CGSS Director Col. Scott Green with a challenge coin for his initiative and creativity in planning and executing the Iron Major competition despite the social distancing conditions the class was under.