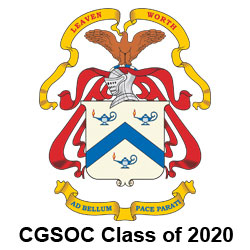 Amid the restrictions from the COVID-19 pandemic traditional Command and General Staff Officer Course (CGSOC) graduation ceremonies at Fort Leavenworth and its satellite campuses were conducted in a virtual environment for the 2020 classes of the course.

In the world of virtual graduation ceremonies the outprocessing for CGSOC resident students also transitioned into a “rodeo” style line in the student parking lot. Tents were set up with various stations by the CGSS staff to allow students to simply drive through and outprocess.

Students in the Fort Lee, Va., satellite campus class graduated on April 22, 2020, with 62 graduates from around the world. Before the graduation they conducted a final online meeting. During the ceremony they recognized the top academic graduate/honor graduate, Maj. Sara Tracy-Ruazol and the top physical fitness awardee, Maj. Molly Byrnes, who earned the highest physical fitness score in the class (372 on the extended scale).

According to Assistant Professor Penny Koerner of the Fort Lee Satellite Campus faculty, all the students seemed to appreciate the virtual graduation ceremony and how the faculty was able to be flexible in delivering class instruction in spite of the conditions.

The Fort Belvoir Satellite Campus graduated 125 officers from around the globe in a virtual graduation conducted April 23, 2020. Command and General Staff School (CGSS) Director Col. Scott Green served as the keynote speaker from his office at Fort Leavenworth.

In an article he wrote about Belvoir’s virtual graduation, Supervisory Assistant Professor Mike Bizer said the students participated in on-site classes for the first 10 weeks of the 16-week course, but conducted the final six weeks in the virtual, distance-learning environment once the COVID-19 restrictions were imposed.

Bizer said the class graduates who participated in the virtual ceremony were from the Washington, D.C. area, Kansas, Texas, California, Alaska, Hawaii, Germany and Korea. The honor graduates recognized during the ceremony were Maj. Kerney Perlik and Maj. Bruce Mayeaux. 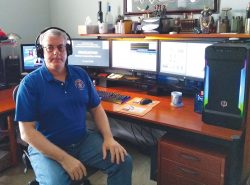 According to Assistant Professor Clayton Newton who also provided welcoming remarks during the ceremony, each student’s name was read during the ceremony to replicate “crossing the stage,” and the four staff group advisors were recognized for their efforts in advising, coaching and counseling throughout the year. Students from the class also presented a replica of the lever action rifle used by the famed Buffalo Soldiers in the West as a gift to the school, which will be displayed at the Redstone Arsenal Campus.

At the close of the ceremony Newton said they kept the online session open for several minutes, allowing the students to send chat messages to each other, say good-bye, and congratulate each other.

In the resident course CGSOC Class of 2020 there were 1,125 graduates:

Additionally, 135 of the graduates earned the Master’s in Military Art and Science Degree.

“CGSC is hard,” said Rainey, “It’s harder if you’re an international student. I’ve attended some schools with other armies in other countries and it’s just automatically harder whether it’s because of unfamiliarity with the subject matter, language challenges, or being away from your family. So it’s harder for international students. It’s really hard if you’re doing all that in the midst of a pandemic. So I’d like to congratulate all of you students who have successfully completed the course.”

After the general’s remarks Jim Fain, director of the International Military Student Division, announced the recipient of the General Dwight D. Eisenhower Award, which is presented to the Distinguished International Officer Graduate of each class. – Maj. Allessio Battisti from Italy is the Class of 2020 recipient. Fain also announced the recipient of the Major General Hans Schlup Award – Capt. Abdel-Aziz Ali Orou from Benin. Fain said the Schulp Award is unique in that it is the only award conferred by CGSC based on peer selection and is intended to recognize the importance of relationships developed among the network of friends and professional acquaintances made while attending CGSC.

Fain’s remarks were followed by a montage of portraits of all the international officers who received their International Officer Badges and remarks by the class International Military Student Chief of Staff Maj. Jan In het Veld from the Netherlands. – View the complete video of the ceremony

On June 12, Secretary of the Army Ryan McCarthy and Gen. James McConville, Chief of Staff of the Army, addressed the Class of 2020 resident students in the virtual ceremony.

Chief of Staff of the Army Gen. James McConville addresses the graduates of the resident course of the CGSOC Class of 2020 during the virtual ceremony on June 12, 2020.

“If you don’t remember anything else I say today,” McConville said, “I want you to remember two things. – People first…and winning matters. ‘People first’ is a philosophy and I believe if you take care of your people – your Soldiers, your families, and your civilians – and if you create a command climate where everyone takes care of each other and treats everyone with dignity and respect, you will have a great cohesive team which will win on any battlefield.” 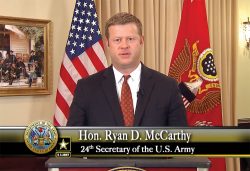 Secretary of the Army Ryan McCarthy delivers remarks during the virtual graduation ceremony on June 12, 2020, for the CGSOC Class of 2020.

“This is a transition point in your careers where you step into your new role as field grade officers,” said Secretary McCarthy in his remarks. “Unofficially you’ll be known as ‘Iron Majors.’ That’s not by accident. The Army simply expects more from its field grades as your power shifts from positional to organizational. As challenging as your careers and the mission have been thus far, paired against an increasingly complex and dangerous world, the Army will once again look to you to achieve the mission and preserve the force.”

“Congratulations to you and your families,” McCarthy said in closing. “This is a huge milestone in your career and you should be incredibly proud. You are continuing to serve the nation in a time of need and what you do matters. Good luck to each of you Iron Majors and I look forward to seeing you in the field.” 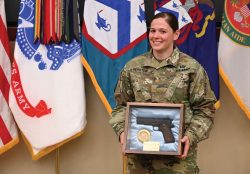 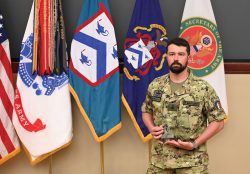 After the official remarks, winners of the class awards were announced followed by a scrolling list of graduate names signifying their successful completion of the course. – View the complete video of the ceremony

The top awards for the CGSOC Class of 2020 were:

Prior to the virtual ceremony, CGSS Director Col. Scott Green conducted an in-person awards ceremony on June 11 in the Marshall Auditorium of the Lewis and Clark Center to present the individual awards to the winners. No other students or outside guests were allowed in order to comply with the COVID-19 restrictions.

Read the awards article with full list of awards/awardees.

One thought on “Virtual ceremonies mark the CGSOC Class of 2020”

One thought on “Virtual ceremonies mark the CGSOC Class of 2020”