‘My Lai: A 50-Year Perspective’ topic of latest Vietnam Lecture 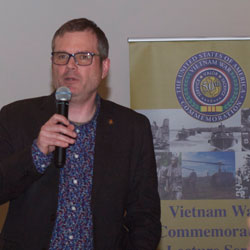 The latest lecture in the Vietnam War Commemoration Lecture Series was conducted March 1 at 6 p.m. in the Stove Factory Ballroom in downtown Leavenworth, Kansas (417 S. 2nd Street). A reception sponsored by the CGSC Foundation began at 5:30 p.m.

In this 11th lecture of the series, Dr. Bill Allison, professor of history at Georgia Southern University, presented “My Lai: A 50-Year Perspective.” Allison described how on March 16, 1968, members of Charlie Company, 1st Battalion, 20th Infantry Regiment, 11th Brigade, 23rd (Americal) Infantry Division, murdered as many as 500 South Vietnamese civilians in less than three hours. The incident was covered-up by the Americal Division for over a year, with the American public learning of the My Lai killings in September 1969. Ultimately, only one soldier – Lt. William Calley – was convicted. Dr. Allison discussed the incident, the difficulty of evidence, and the impact My Lai had on the American War in Vietnam.

In addition to Dr. Allison’s presentation, CGSC Foundation trustee Col. (Ret.) Bill Eckhardt was in attendance and contributed to the discussion during the question and answer session at the end. A major in the Army’s Judge Advocate General’s Corps at the time, Eckhardt was the U.S. Army’s chief prosecuting attorney in the My Lai trials.

Eckhardt attested to the difficulty of gathering and presented evidence in the trials, but was adamant that although this was a very ugly situation for the Army, ultimately there was some good in all of it. – And that “good” in Eckhardt’s estimation was Hugh Thompson. Thompson, a helicopter pilot at the time, had landed his aircraft and tried to intervene to stop the killing. He was instrumental in saving some of the civilians and later submitted a report and testified against those responsible during the trials in 1970. 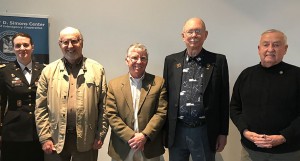 Dr. Bill Allison has been a professor of history at Georgia Southern University since 2008. After earning bachelor’s and master’s degrees in history at East Texas State University in 1989 and 1991, he completed his Ph.D. in history at Bowling Green State University in 1995. He then taught at the University of Saint Francis (Indiana) before joining the history department at Weber State University from 1999-2008. During the 2002-2003 academic year, he was Visiting Professor in the Department of Strategy and International Security at the U.S. Air Force Air War College and was Visiting Professor of Military History at the U.S. Air Force School for Advanced Air and Space Studies from 2010-2011. He recently completed two years as the General Harold K. Johnson Visiting Chair in Military History at the U.S. Army War College (2012-2014). He is the author of several works including Military Justice in Vietnam: The Rule of Law in an American War (University Press of Kansas, 2007). He is a former trustee and vice president of the Society for Military History and has served on the editorial board of the Journal of Military History. He has also served as a member of the Department of the Army Historical Advisory Committee and was awarded the Army’s Outstanding Civilian Service Medal in 2014. He is currently working with Oxford University Press on a book about the Tet Offensive. 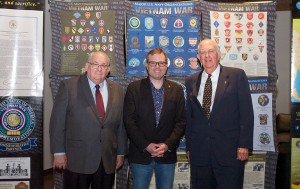 From left, Dr. Jim Willbanks from CGSC’s Department of Military History, Dr. Bill Allison, and CGSC Foundation Trustee Col. (Ret.) Bill Eckhardt. Willbanks was one of the driving forces for the Vietnam lecture series when he was the director of the history department. He has delivered many of the lectures in the series.

The next lecture in the series will be conducted in September 2018 with Dr. Geoff Babb from the faculty of CGSC presenting “Chinese Involvement in the Vietnam War.” A specific date will be announced later.

For more information on the content of lectures in the series contact Dr. Tom Hanson, CGSC’s director of the Department of Military History: email– thomas.e.hanson.civ@mail.mil or phone– 913-684-2056. For other questions, contact Rod Cox, email– rcox@thesimonscenter.org, or Ann Soby, email– ann@cgscf.org, at the CGSC Foundation or phone 913-651-0624.

All lectures in the series are free and open to the public. This lecture series is presented by CGSC’s Department of Military History, U.S. Army Garrison Fort Leavenworth and supported by the CGSC Foundation and the Henry Leavenworth Chapter of AUSA.

The CGSC Foundation has received additional support for the Vietnam lectures in academic year 2018 from the national headquarters of the Veterans of Foreign Wars (VFW) in Kansas City, Missouri, First Command Financial Services in Leavenworth, Kansas, and Vietnam Veterans of America (VVA).

One thought on “‘My Lai: A 50-Year Perspective’ topic of latest Vietnam Lecture”

One thought on “‘My Lai: A 50-Year Perspective’ topic of latest Vietnam Lecture”