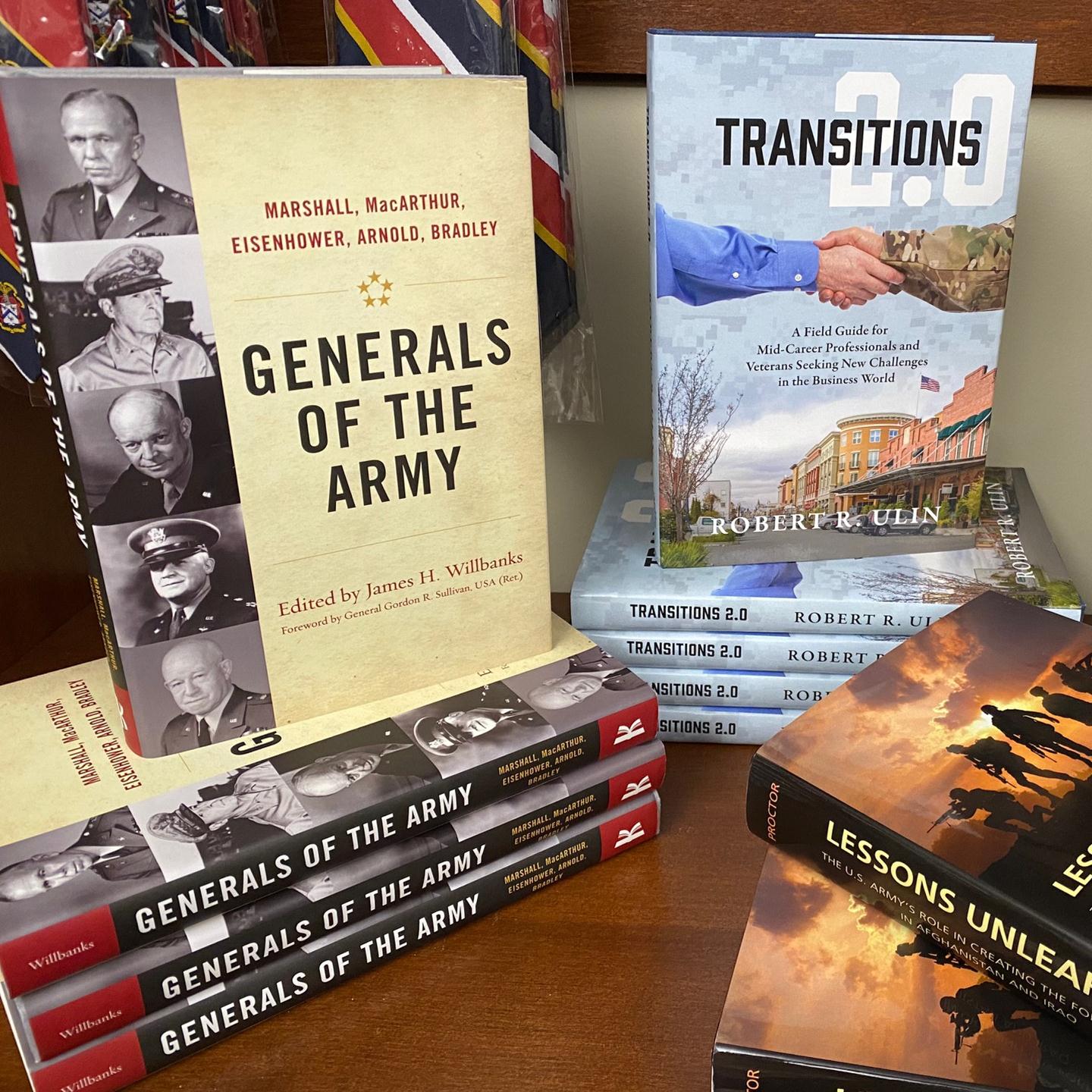 October is National Book Month! The importance of the written word cannot be overstated. The U.S. Army Command and General Staff College has long been the lead agent for education and leader development in the Army, and has produced countless soldiers, statesmen, scholars, and authors.

The CGSC Foundation is proud to support the faculty and alumni of the U.S. Army Command and General Staff College in their research and scholarship. The Foundation promotes these authors in the “In Print” section of the Foundation News magazine and by offering a selection books by CGSC authors in our gift shops.

Below you will find more information about some of the books available at the CGSC Foundation Gift Shop and the Frontier Army Museum Gift Shop. These titles can be found in-store or online at giftshop.cgscfoundation.org. 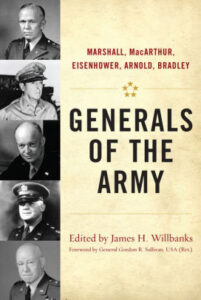 The five-star general, formally titled “General of the Army,” is the highest possible rank awarded in the U.S. Army in modern times and has been awarded to only five men in the nation’s history: George C. Marshall, Douglas MacArthur, Dwight D. Eisenhower, Henry H. Arnold, and Omar N. Bradley. In addition to their rank, these distinguished soldiers all shared the experience of serving or studying at Fort Leavenworth, Kansas. In “Generals of the Army,” James H. Willbanks assembles top military historians to examine the connection between the institution and the success of these exceptional men. Historically known as the “intellectual center of the Army,” Fort Leavenworth is the oldest active Army post west of Washington, D.C., and one of the most important military installations in the United States.

Editor Dr. James H. Willbanks retired from the U.S. Army Command and General Staff College in 2018 after 26 years of service to the College. During his time at CGSC, Willbanks served as both director of the Department of Military History and the General of the Army George C. Marshall Chair of Military History. Dr. Willbanks is a decorated Vietnam veteran, and graduated from the Command and General Staff School in 1983 and the School of Advanced Military Studies in 1984. Dr. Willbanks also served as a consultant to producer Ken Burns for “The Vietnam War,” which aired in 2017. In May 2021, Willbanks returned to speak at a CGSC Foundation Vietnam Lecture and participate in a book signing for “Generals of the Army.” 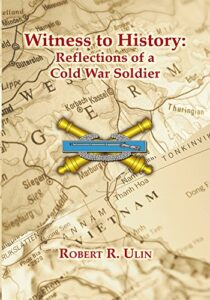 Witness to History: Reflections of a Cold War Soldier by Rober R. Ulin, 2011

From a simple start as an Army private in 1959 to his current successes, author Robert R. Ulin has had the fortune to not only witness history, but be an active participant in it. Witness to History is his story – from the jungles of Vietnam to the Cold War battlefields of Europe to the startup and operation of one of the most successful staff or war college foundations in U.S. history. Ulin’s story adds great detail to the fabric of this period of our Nation’s history as told by one who lived it with honor and integrity.

COL (Ret.) Robert R. Ulin is the founding CEO and President of the CGSC Foundation, Inc. and currently serves as the Foundation’s Chief Development Officer. He discussed Witness to History at the Eisenhower Presidential Library in June 2012. During his original retirement from the CGSC Foundation, Ulin founded the Center for Transitional Leadership, where he offered professional coaching and consulting for transitioning from military to private sector careers. Ulin has authored and contributed to several books, has also been published in the InterAgency Journal, and penned the inaugural InterAgency Essay for the Simons Center for InterAgency Cooperation. He graduated the U.S. Command and General Staff College with the class of 1978. 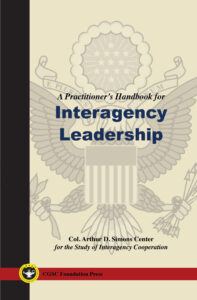 National security requires a whole-of-government approach. Americans deserve to have all parts of their government working in concert to provide for their common defense and general welfare. How does a leader from one agency lead resources from other departments, nongovernmental organizations, or other nations? This practitioner’s handbook for leading in the joint, interagency, intergovernmental, and multinational environment (JIIM) is a useful reference that provides information to better understand why and how the environment is different than what you know in your agency. Read a review.

Author William J. Davis, Jr., Ph.D. has been teaching professional military education for more than 20 years, and has been a professor of strategic studies at the U.S. Army Command and General Staff College Fort Lee Campus since 2006. He also serves on the Editorial Board of the Arthur D. Simons Center for Interagency Cooperation. Prior to joining the Simons Center’s Editorial Board, Davis published several articles in the InterAgency Journal on ethics in decision-making, inter-organizational effectiveness, and what sets the JIIM environment apart from others.

$12.00 through the CGSC Foundation.
Kindle version available on Amazon. 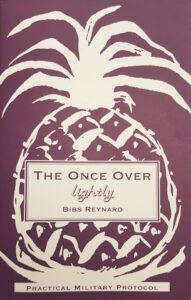 Once Over Lightly: Practical Military Protocol by Bibs Reynard, 1981, 2017

Once Over Lightly provides a brief overview of many aspects of military life, and is especially helpful for new military spouses or anyone else with limited experience with the military. This practical protocol guide has been updated and re-released numerous times since its original publication in 1981. This 17th edition includes a new “Bits and Pieces” section that touches on topics not discussed in previous editions, including social media.

$7.00 through the CGSC Foundation. 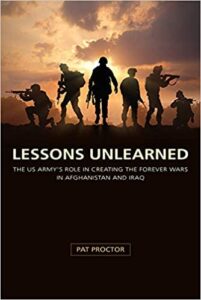 Lessons Unlearned: The U.S. Army’s Role in Creating the Forever Wars in Afghanistan and Iraq by Pat Proctor, 2020

In this blunt critique of the senior leadership of the U.S. Army, author Pat Proctor contends that after the fall of the Soviet Union, the U.S. Army stubbornly refused to reshape itself in response to the new strategic reality, a decision that saw it struggle through one low-intensity conflict after another—some inconclusive, some tragic—in the 1980s and 1990s, and leaving it largely unprepared when it found itself engaged—seemingly forever—in wars in Afghanistan and Iraq.

Colonel (Ret.) Pat Proctor, Ph.D., is an assistant professor in the homeland security program at Wichita State University, and serves on the Board of Trustees of the CGSC Foundation, Inc. He is a graduate of both the U.S. Army Command and General Staff Officer Course and the School of Advanced Military Studies. Prior to retirement, Proctor served as a chief of operations group at the Mission Command Training Program at Fort Leavenworth. He presented on the 1968 presidential election and its impact on the Vietnam War as part of the Vietnam War Commemoration Lecture Series in November 2018. 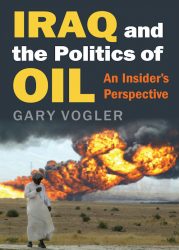 Iraq and the Politics of Oil: An Insider’s Perspective by Gary Vogler, 2017

Was the Iraq war really about oil? As a senior oil advisor for the Office for Reconstruction and Humanitarian Assistance and briefly as minister of oil, Gary Vogler thought he knew. But while doing research for a book about his experience in Iraq, Vogler discovered that what he knew was not the whole story—or even the true story. The Iraq war did have an oil agenda underlying it, one that Vogler had previously denied. This book is his attempt to set the record straight.

Mr. Gary Vogler is the President of Howitzer Consulting. Vogler is a former Army officer, and served as a senior oil consultant for U.S. Forces in Iraq from December 2006 to September 2011. He worked in management positions at ExxonMobil and Mobil Oil Corporations for over two decades. Vogler graduated from the United States Military Academy at West Point, and received a Master of Business Administration at the University of Utah. He currently serves on the CGSC Foundation Board of Trustees as the Vice Chair for Washington, DC. 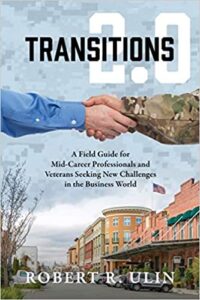 Transitions 2.0 is a field guide for mid-career professionals and veterans seeking new challenges in the business world. The more successful transitions are those that are planned, but even if you didn’t see it coming, the first thing you need to do is take stock of your surroundings and determine who you are, what you want to do and why, and develop a plan of action. This book will help you chart the path ahead.

COL (Ret.) Robert R. Ulin is the founding CEO and President of the CGSC Foundation, Inc. and currently serves as the Foundation’s Chief Development Officer. During his original retirement from the CGSC Foundation, Ulin founded the Center for Transitional Leadership, where he offered professional coaching and consulting for transitioning from military to private sector careers. Ulin has authored and contributed to several books, has also been published in the InterAgency Journal, and penned the inaugural InterAgency Essay for the Simons Center for InterAgency Cooperation. He graduated the U.S. Command and General Staff College with the class of 1978.

More books are available online and at the CGSC Foundation and Frontier Army Museum gift shops. Shop online or in-store.