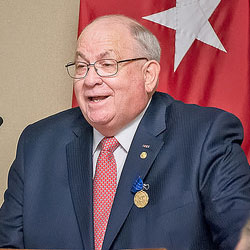 Dr. James Willbanks, General of the Army George C. Marshall Chair of Military History for the Command and General Staff College was honored in retirement ceremonies at the Lewis and Clark Center April 24. Willbanks career dates to 1969 when he was commissioned a lieutenant of infantry after graduating from Texas A&M University. 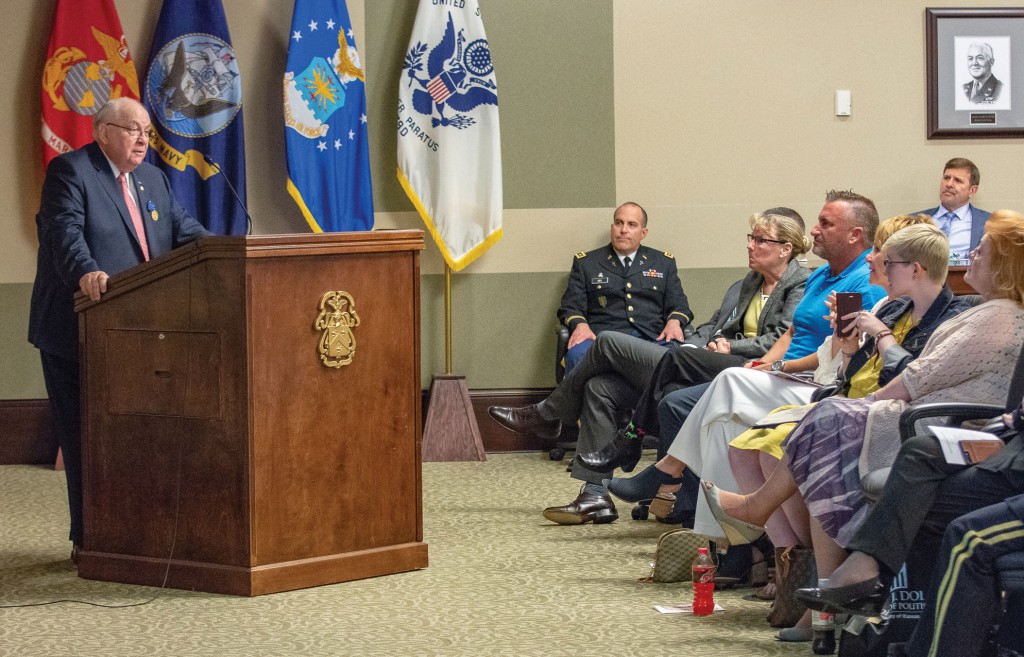 Dr. Jim Willbanks addresses family, friends and colleagues during his retirement ceremony on April 24, 2018 in the Arnold Conference Room of the Lewis and Clark Center.

His early military career saw him earn awards for valor in Vietnam and documenting that conflict has been is life-long calling. Willbanks retired from military service in 1992 and began his second career as a civilian instructor at CGSC. Earning his doctorate in history from the University of Kansas, he rose to become the director of the Department of Military History at CGSC. “This is the best military history department in the whole country,” he said.

He served as both the director and Marshall Chair holder before stepping down as director to devote his attention to research and writing the past two years. He said serving as the Marshall Chair gave him time to research, write, speak and think about military history. 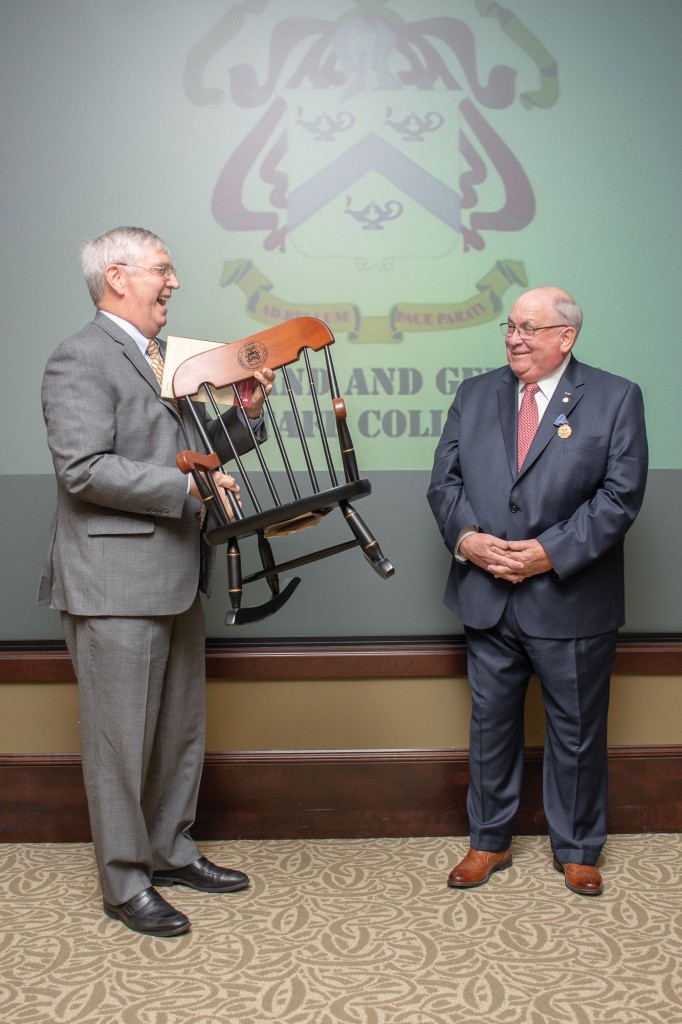 Upon retirement Willbanks was named Professor Emeritus. He is the eighth person to earn that honor from CGSC. He said he was honored to have served and charged his faculty teammates with maintaining the sacred trust of educating and training young field-grade officers who will go on to lead the Army.

“I’ve said it before and I’ll say it again – Dr. Jim Willbanks is an absolute treasure for the College and the Foundation as well,” said CGSC Foundation President/CEO Doug Tystad. “He has always been a person that makes things happen and has been a stalwart force in not only leading his department, but also extending its reach through two successful after-hours lecture series the Foundation has been supporting.”

Willbanks has been a Foundation resource even beyond the “General of the Armies John J. Pershing Great War Centennial Series” and the “Vietnam War Commemoration Lecture Series.”

“Whenever we’ve needed support or information about a historical issue or an unvarnished opinion, Jim has been our guy,” said Tystad. “In recent months we’ve worn him out autographing copies of the Generals of the Army book, which he edited, and despite the occasional ‘Willbanks grumble,’ he’s always accommodated us. We’re definitely going to miss him around here.” 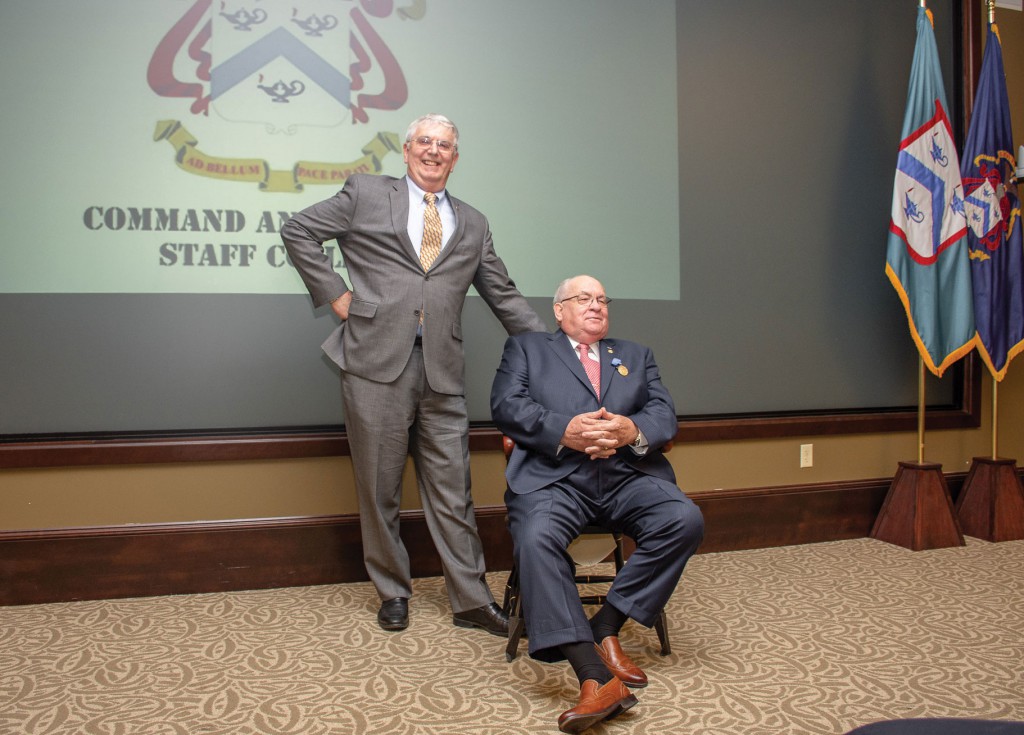 After a few laughs with a child-sized chair, all is right in the world again as Dr. Willbanks lays claim to his actual full-sized chair presented by the CGSC Foundation in recognition of his selection as CGSC Professor Emeritus.

In recognition of his selection as CGSC Professor Emeritus, the Foundation presented Willbanks with a CGSC College chair, but not without having a little fun with him initially. The first chair Tystad unveiled was a child-sized rocking chair version which drew a few laughs, even from Willbanks. After a good chuckle, Tystad presented him with the actual chair, a gift the Foundation presents to every selected emeritus professor.

Dr. Willbanks is a decorated Vietnam veteran who has been on the CGSC faculty since 1992, when he retired from the Army as a Lieutenant Colonel with 23 years’ service as an infantry officer in various assignments, to include a tour as an infantry advisor with a South Vietnamese regiment during the 1972 North Vietnamese Easter Offensive. An honor graduate of the Command and General Staff Officers Course in the Class of 1983, Dr. Willbanks was a member of the first School for Advanced Military Studies (SAMS) Class the next year.

Prior to assuming the Marshall Chair, Dr. Willbanks served as director of the CGSC Department of Military History for eleven years. He holds a bachelor’s in history (1969) and a master’s in management (1979) from Texas A&M University, and a master’s (1992) and doctorate (1998) in history from the University of Kansas.

Dr. Willbanks is the author or editor of sixteen books, including A Raid Too Far (Texas A&M Press, 2014), Abandoning Vietnam (University Press of Kansas, 2004), The Battle of An Loc (Indiana University Press, 2005), The Tet Offensive: A Concise History (Columbia University Press, 2006), and Vietnam War Almanac (Facts on file, 2009). He and his work have been highlighted in media such as the New York Times, Los Angeles Times, US News & World Report, Wall Street Journal, Army Times, Stars and Stripes, and on PBS television. He served as a consultant to producer Ken Burns in the production of a 10-part, 18-hour documentary on the Vietnam War for PBS, which began airing in the Fall of 2017.

Dr. Willbanks retires after forty-nine years of combined federal service. He and his wife now reside in Georgetown, Texas.

The CGSC Foundation board of trustees and staff wish Dr. Willbanks and family well as they begin this new chapter of their lives. “Well done,” as has been said and quoted for several hundred years, surely is the simplest, and most deserved salutation we can offer.

Visit the CGSC Flickr album for more photos from the ceremony.