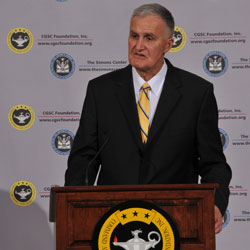 General Shelton’s military career spanned nearly four decades, culminating in his assignment as the Chairman of the Joint Chiefs from 1997-2001. He served two tours of duty in Vietnam, one with the 5th Special Forces Group and another with the 173rd Airborne Brigade. He commanded the 82nd Airborne Division and the XVIII Airborne Corps, as well as the U.S. Special Operations Command.

Shelton was the fourth recipient of the Foundation’s award preceded by Gen. Colin Powell in 2008, Gen. Gordon Sullivan in 2009 and Mr. Ross Perot in 2010. And it was Perot who showed up at the banquet and made sure that his friend Gen. Shelton was honored appropriately as the evening’s special guest speaker.

“I have never known anybody who cared more…about every single person in his command,” said Perot.

After his remarks Perot presented Shelton with a full size replica of Excaliber, the legendary King Arthur’s sword.

This year is the 10th anniversary of the CGSC Foundation’s Col. Arthur D. Simons Center for Interagency Cooperation, the Center for which Perot was the prime benefactor and responsible for naming it after his good friend Col. Simons. The Foundation is ensuring in this anniversary year that the memories of Perot’s contributions to the Foundation are kept alive. Perot’s joyful participation in the award for General Shelton was but one of the memories the Foundation cherishes.

Gen. Hugh Shelton speaks to the guests after receiving the CGSC Foundation’s 2011 Distinguished Leadership Award. Seen at right is the replica “Excaliber” sword, a personal gift to Shelton from Mr. Ross Perot in honor of the occasion.