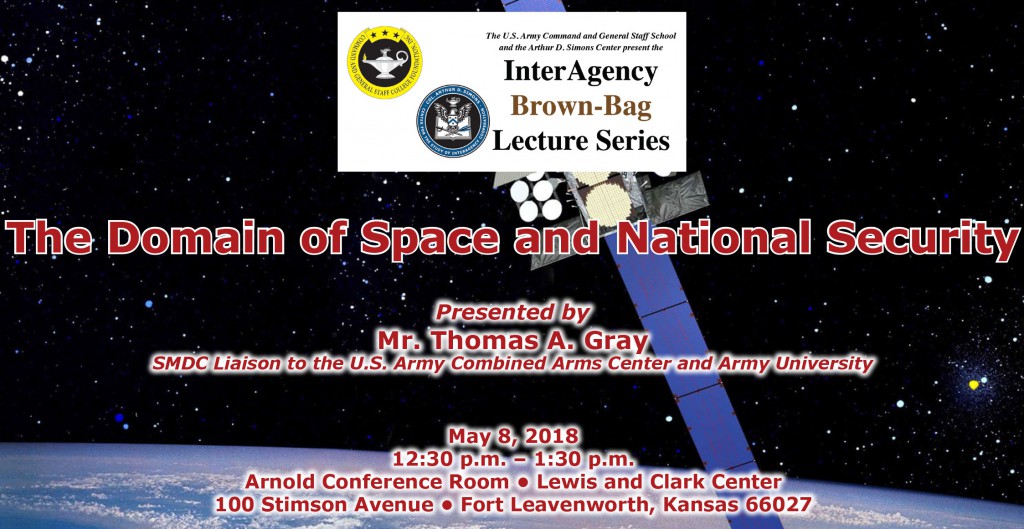 The ninth presentation of the InterAgency Brown-Bag Lecture Series for CGSC academic year 2018 will be conducted at 12:30 p.m., May 8 in the Arnold Conference Room in the Lewis and Clark Center on Fort Leavenworth. Mr. Thomas A. Gray, the U.S. Army Space and Missile Defense Command Liaison to the Combined Arms Center and Army University, will deliver a presentation entitled “The Domain of Space and National Security.”

This series is co-hosted by the CGSC Foundation’s Simons Center with the U.S. Army Command and General Staff School (CGSS). The InterAgency Brown-Bag Lecture Series is an extracurricular, interagency topic-focused series that is intended to help enrich the CGSS curriculum. The presentations are scheduled each month. The CGSC Foundation and the Simons Center have received support for all brown-bag lectures in academic year 2018 from First Command Financial Services in Leavenworth, Kansas. A schedule for future InterAgency Brown-Bag Lectures can be found here.