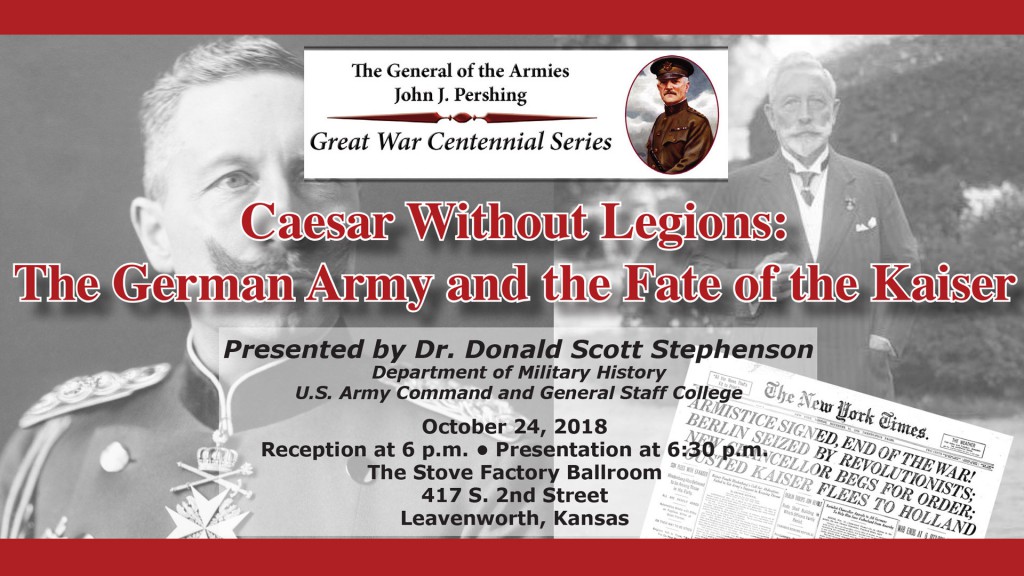 The Department of Military History of the U.S. Army Command and General Staff College and the CGSC Foundation at Fort Leavenworth invite the public to attend the 17th in a series of lectures intended to educate the public about World War I during its 100-year commemoration. – Dr. Donald Scott Stephenson will present “Caesar Without Legions: The German Army and the Fate of the Kaiser,” at the Stove Factory Ballroom in downtown Leavenworth, Kansas (417 S. 2nd Street), Oct. 24, at 6:30 p.m. Attendees are also invited to the reception that begins at 6 p.m.

In November 1918, facing defeat on the battlefield and revolution at home, the German Kaiser faced an impossible decision. Should he seek a hero’s death at the front, should he lead the army into the homeland to crush the revolution, or should he flee to a neutral country to avoid the fate of his cousin, Tsar Nicholas, shot down by a revolutionary firing squad? In this 17th lecture in the series Dr. Stephenson will examine the Kaiser’s decision.

Dr. Donald Scott Stephenson served 25 years as an Army officer, retiring in 2001. He has a bachelor’s degree from the United States Military Academy, a master’s in history from Syracuse University, and a doctorate in history from the University of Kansas. He has taught military history at the U.S. Army Command and General Staff College for 25 years. His book, The Final Battle: Soldiers of the Western Front and the German Revolution of 1918, won the 2010 Tomlinson Prize for Best Book in English on World War I.

The CGSC Department of Military History hosts the General of the Armies John J. Pershing Great War Centennial Series with support from the CGSC Foundation. The lecture series is intended to foster understanding of this world-changing conflict during its 100-year commemoration. More than any other single event, World War I was the decisive, shaping experience of the Twentieth Century. It was a brutal war that brought down four empires, led to revolution in Russia, and eventually brought the United States onto the world stage as a major power. We live with its results to this day. The CGSC Foundation has received support for all Pershing lectures in academic year 2019 from First Command Financial Services in Leavenworth, Kansas.

All lectures in the series are free and open to the public. For more information on this lecture series contact contact Rod Cox, email– rcox@thesimonscenter.org, or phone 913-82-7244.